Humphrey Hawksley's dispatches from the famous BBC program From Our Own Correspondent. 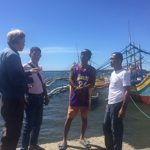 The Philippines, has found itself in the eye of the storm after China took over traditional Philippine fishing grounds about a hundred miles off its west coast. In 2014, Chinese Coast Guard crews pounded them with water cannon and ordered them to leave. China has since occupied the area known as Scarborough Shoal, despite the Philippines having a defence treaty with the United States, should it come under attack. Humphrey Hawksley has been to the fishing village most affected and discovered that beyond the high-level diplomacy things were not exactly as they seemed. […]

END_OF_DOCUMENT_TOKEN_TO_BE_REPLACED 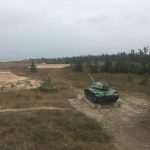 It was not only Beijing, but also Taipei that was relieved by the U.S. president’s decision to continue to policy of one China, respecting Beijing’s insistence that any country that recognises China cannot recognise Hong Kong, Macau or Taiwan. After years of being an unresolved by settled situation, Donald Trump indicated that the U.S. might want closer ties with Taiwan and the island suddenly because a flashpoint again that could redefine America’s relationship with Beijing. At present, Taiwan has a close relationship with China and after a short ferry ride from the Chinese mainland to a Taiwanese island, Humphrey Hawksley sees why. […]

END_OF_DOCUMENT_TOKEN_TO_BE_REPLACED

NYAMURHALE, DEMOCRATIC REPUBLIC OF CONGO, May 2012

Demand for gold has been booming, but at present, the gold industry is concerned that too much of its origins cannot be traced. New international efforts are now underway to clean up the industry and make the supply chain more transparent. At present the black market for gold is flourishing. It is easy to smuggle and melt down.  A new American law is focusing on one specific area – the Democratic Republic of Congo which produces what are known as ‘conflict minerals.’ The law requires any American company that believes it might be using minerals from there to register with the government. Many of the metals are used in our every-day gadgets such as phones and computers.  Humphrey Hawksley  has been to the Congo to look at the bottom end of the supply chain. […]

END_OF_DOCUMENT_TOKEN_TO_BE_REPLACED

Hundreds of thousands children in India are involved in picking and processing cotton. Many are kept out school, work in dangerous conditions and some are not even paid. Campaigners say the big UK clothing stores should do much more to stop child labour being used in their supply chains. One of the main cotton producing areas is Gujarat in Western India. From there Humphrey Hawksley sent this report. […]

END_OF_DOCUMENT_TOKEN_TO_BE_REPLACED

Thousands of people in north east Uganda are facing starvation after a severe crop failure and drought. The Karamoja region is one of the poorest parts of Africa. But aid agencies say food handouts alone are not the answer. They are trying out a new approach where only the most vulnerable get help. It’s a policy that has considerable risks. Our World Affairs Correspondent, Humphrey Hawksley reports. […]

END_OF_DOCUMENT_TOKEN_TO_BE_REPLACED

One of the most divisive issues between Russia and the United States in recent years has been the expansion of NATO – a Western military alliance seen largely by Moscow as a mechanism to keep Russian power in check. Many of the governments from the former Cold War Eastern Bloc have or are planning to join. One is the tiny country of Montenegro, wedged between Croatia and Albanie, where the prospect of NATO membership fills many of its citizens with horror, as Humphrey Hawksley reports. […]

END_OF_DOCUMENT_TOKEN_TO_BE_REPLACED

Some sixty countries from the developing world are planning to use nuclear power in the near future. Many believe that their fuel supplies could be blocked by Western sanctions totally unrelated to their nuclear ambitions, creating the nightmare scenario that they will begin enriching their own uranium. One solution is to create stockpiles of uranium, controlled by the United Nations, that these governments could draw upon. They would be known as international nuclear fuel banks. Two have already been earmarked – one in Russia and one in Kazakhstan – from where Humphrey Hawksley reports. […]

END_OF_DOCUMENT_TOKEN_TO_BE_REPLACED

One of the traditions of the Christmas festival is the bottle of port, that fortified wine used to wash down mince pies and Stilton cheese. But is it still like that? And given all the traditions surrounding port, from the Royal Family to crusty clubs – who exactly drinks port nowadays – particularly given the recession. Port comes from one of the oldest demarcated wine growing areas in the world in northern Portugal where Humphrey Hawksley went to see how the port trade was faring. […]

END_OF_DOCUMENT_TOKEN_TO_BE_REPLACED

In 1935, the writer Graham Greene set off on a journey through Sierra Leone and Liberia. In his book Journey without Maps, Greene asked what were the Europeans doing there? What did the slogans about civilising the natives actually mean? Humphrey Hawksley has been there to retrace Graham Greene’s journey. […]

END_OF_DOCUMENT_TOKEN_TO_BE_REPLACED

One of the most controversial aspects of the Iraq war has been the use of private contractors, who provided everything from bodyguards to catering. President Obama’s has ordered a review of the practice saying that the American people’s money must not be spent lining the pockets of contractors and that a fundamental public trust must be upheld. One of the darkest incidences of Iraq was the Abu Ghraib prison scandal where – although working under US military command many of the interrogators and translators had actually been supplied by private companies. The companies deny doing anything wrong, but Washington officials say clearer regulations must be drawn up.
HH reports. […]