A major charity working to end child slavery in the chocolate industry says the problem could be solved within a month if the will was there to act. Just over a year ago – after repeated allegations – the chocolate companies admitted that child slaves could be used in the growing of cocoa – the raw product for chocolate. They went on to sign a protocol saying that all chocolate would be free of the taint of slavery by 2005.

The morning Malian sun was so severe that it cast on the white-washed wall stark shadows of four children sitting upright and bewildered on a bench. A fan cooled sweat from their faces. Its breeze blew a sheet of paper off the table. One of the children helpfully ran after it and handed it over to the woman looking after them.

‘We are like your parents,’ she told them gently. ‘Whatever is here belongs to you.’

One of the boys buried his face into his cupped hands, the relief was so great. The oldest was 13. The youngest, 10.

‘What happened to you?’ I asked.

‘I was playing football,’ said Karim Sadibe, the one closest to me. ‘This man said I should come with him to the Ivory Coast. He would sign me up for the national team and I would get lots of money and that I shouldn’t tell my parents.’

Karim went, but luckily was intercepted by police. The man who was to have sold him into slavery – probably for about a fifty pounds – melted away. Karim was sent back to Mali, to a center run by Save the Children Fund, Canada. All of that had taken place within the past week.

Next door was Moussa Doumbia, who’s now twenty. He slipped off a freshly pressed pink shirt to reveal welted scars where he had been made to carry sacks of cocoa until he managed to escape two years ago. At night he slept on the floor in a locked room. He was given food once a day. If he complained, he was beaten. The boys who tried to escape had their feet cut with razors.

‘I don’t know how one human being can treat another in the way they treated me,’ he whispered.

The answer, put simply, is because the market is there for it – and until recently no-one bothered to question the ethics behind it.

Unlike with wine or coffee, with chocolate you don’t even know for sure which country the cocoa comes from. The chances are, though, it’s the Ivory Coast, which produces almost half the world’s cocoa.

The British spend four billion pounds a year on chocolate, yet the big household names, such as Cadbury Schweppes, Mars and Nestle, refuse to speak individually on the thorny issue of child labor. They describe it as an ‘industry’ issue. They say they are setting up a trust foundation and that surveys have been commissioned. They’ve also signed an international protocol.

By July 2005, we should be guaranteed that our chocolate is not produced with child slave labor.

At present, no such guarantee exists.

How this will be done, though, is not clear. No figures on money and manpower are available. As for the surveys, no-one had even gone through the Mali government records, for example, to see how the trafficking takes place.

‘The surveys’ objective is to look at what is going on in the field, in the cocoa growing areas themselves, currently right now,’ said Bob Eagle, the industry spokesman, put up by the chocolate companies.

‘Not to see the children themselves,’ I ventured.

‘I think if we look at the detail and objectives it is very much about what is going on in the villages and towns.’

So I set off to find out what was going on. A drive of hundreds of miles from the parched bush land of Mali to the lush jungle of Ivory Coast.

I had thought that finding child labor would be difficult. I had talked to contacts, gathered phone numbers, spent hours of preparation. In the end, I needed none of it.

Half an hours drive from our hotel in the city of Yammousoukrou along the main road to Sinfra, we turned into a village, drove through, down a dirt track, past a cocoa plantation and saw gangs of children coming towards us.

They wore grubby, torn T-shirts and carried machetes, their heads hung in confusion.

It was a Wednesday morning. The oldest was thirteen. The others didn’t know their age. The youngest, I don’t know, six or seven. As we talked to them, another gang passed us on their way to work. After that a group of women, who saw nothing unusual about child workers.

Then their boss turned up, on a bicycle, looking for them. He was only 15 himself.

It turned out the boys were shunted between maize, coffee and cocoa farms – depending on the season. If they were paid, it was the equivalent of a pound a day – between the ten of them.

‘We spend all the time bent over in the field,’ one managed.

Down the road to my right was a cocoa farm. In front of me was evidence of the contravention of at least two International Labor Organization conventions 138 and 182, aimed at protecting children from abusive labor and giving them a right to an education.

If child labor is so easy to find, the numbers might be in the hundreds of thousands, if not the millions.

I gave their names to an official of the Ivory Coast government and told him where we found them. I showed their pictures to the chocolate spokesman, Bob Eagle. There was no sign that any immediate help was its way to them. Mr Eagle said exploitative child labor was unacceptable in his industry – and reiterated the deadline of July 2005 to end it.

But that means, although we know who they are and where they are, they could be working in the farms for at least another three years. At the center in Mali, Save the Children Fund says, if the will was there, the problem could be fixed within a month. 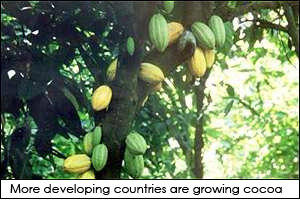 Chocolate companies have been told they will have to pay more for cocoa if child slavery is to end in West Africa.

In an uncompromising message, Ivory Coast – the world’s biggest producer of cocoa – has blamed the multinationals for keeping prices low and farmers in poverty, driving some of them into using forced labour.

Senior Ivory Coast ministers are pressing their case to the UK Government at meetings on Friday, and the chocolate companies have been called to the Foreign Office to explain their policies.

The Ivory Coast Prime Minister, Pascal Affi N’Guessan, said chocolate companies were only interested in their own profits.

If child labour was to stop, he said, the companies would have to pay considerably more to the farmers who grow cocoa. 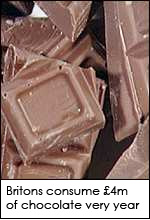 The international industry itself was at the heart of the problem of child trafficking in Africa, he said, adding that multinationals had encouraged more and more developing countries to grow cocoa, which had forced down the price.

He named a price almost 10 times higher than it is now to ensure the quality of life for the seven million farmers and their families in Ivory Coast.

Two Ivory Coast cabinet ministers have flown to London for a meeting with the Foreign Office Minister for Africa, Brian Wilson.

After that, Mr Wilson will be seeing chocolate executives to try to persuade them to do more to ensure their products are not tainted by slave labour.

The industry says the buying chain for cocoa is so complex that it is impossible to guarantee the working practices on every farm.

By BBC’s Humphrey Hawksley in Mali 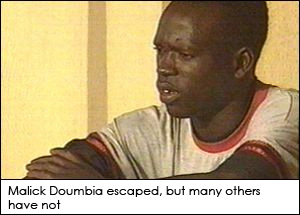 At a run-down police station in Sikasso, a small town in Mali, the files on missing children are endless.

The sad truth is that many have been kidnapped and sold into slavery. The going price is about US$30.

The local police chief is in no doubt where the children have gone. ‘It’s definitely slavery over there,’ he said. ‘The kids have to work so hard they get sick and some even die.’

In all, at least 15,000 children are thought to be over in the neighbouring Ivory Coast, producing cocoa which then goes towards making almost half of the world’s chocolate.

Many are imprisoned on farms and beaten if they try to escape. Some are under 11 years old.

Save the Children Fund has set up a transit centre in the hope that one day these children will come home from the cocoa, coffee and other farms on which they are working. 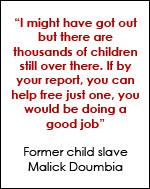 But so far they haven’t. The place is empty, although one who managed to escape has a message worth listening to.

‘I might have got out,’ said Malick Doumbia, ‘but there are thousands of children still over there. If by your report, you can help free just one, you would be doing a good job.’

The work of this former slave ended up in shops around the world, as products that often do not specify exactly where they came from.

So Mali’s Save the Children Fund director, Salia Kante, has a message for shoppers too – think about what you are buying.

‘People who are drinking cocoa or coffee are drinking their blood,’ he said. ‘It is the blood of young children carrying 6kg of cocoa sacks so heavy that they have wounds all over their shoulders. It’s really pitiful to see.’ 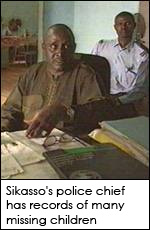 In the market, field worker Ibrahim Haidara asks people what they know about the slave trade.

The slave children are taken from poor areas of Mali – the sons and daughters of street sellers, or the slum kids whose parents sell them for just a few dollars to work as plantation slaves in another country.

Yet the multi-nationals who make their living out of selling chocolate and coffee all around the world haven’t contributed anything to the campaign here to stop the slavery trade taking place.

For a few months last year, the prize for the busiest airport in the world slipped away from those … END_OF_DOCUMENT_TOKEN_TO_BE_REPLACED

I first met Hsiao Bi-Khim on a sidewalk during Taiwan’s 2008 election campaign. Sitting on a low … END_OF_DOCUMENT_TOKEN_TO_BE_REPLACED