The Philippines, has found itself in the eye of the storm after China took over traditional Philippine fishing grounds about a hundred miles off its west coast. In 2014, Chinese Coast Guard crews pounded them with water cannon and ordered them to leave. China has since occupied the area known as Scarborough Shoal, despite the Philippines having a defence treaty with the United States, should it come under attack. Humphrey Hawksley has been to the fishing village most affected and discovered that beyond the high-level diplomacy things were not exactly as they seemed. 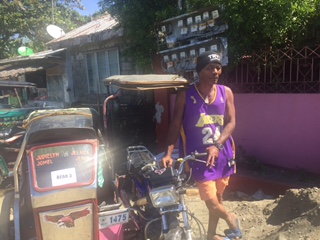 His black hat is emblazoned with the slogan TRY!. He wears a sleeveless bright purple T-shirt. His eyes are narrowed from the sun’s glare, his skin leathery after a lifetime at sea. Muscles bulging, he’s a big man, too big really for the small motorcycle and side car which he calls Team Monster and with which he now makes ends meet by taking passengers here and there.

Jurrick Joson is standing at the end of a dirt track road with shacks and small stalls on one side and the gently lapping West Philippine Sea on the other. The water stretches off in a mix of bright tropical blues and murky greys towards a place, about a day’s sail away, called Bajo de Masinloc or Lower Masinloc. It’s a triangular chain of reefs and rocks with a large lagoon inside, named after Jurrick’s northern Philippine home town. Generations of his family have earned their living fishing there.

“I am so angry,” he says, his eyes flitting between his motorcycle and the sea. “If I had a gun, I would have fought them. If America supports us, we should go to war with them.”

Visibly shaken, Jurrick says he still has nightmares about the day three years ago when his fishing boat was buzzed by Chinese helicopters, threatened by armed men in speedboats and blasted with water cannon.

“This powerful jet of water smashed into my boat,” he says. “Then it hit me directly and I was thrown into the sea. I tried to scramble up and they hit me again. It was as if they really wanted to kill me.”

Jurrick managed to cling on and pull himself to safety. The Philippine fishing boats retreated and since then China has occupied the reef, arguing that it lies within Chinese territorial waters. These waters are also known as the South China Sea, and the fishing ground as Scarborough Shoal. Last year an international tribunal at the Hague ruled that China had violated international law and that there was no legal basis to its territorial claims.

But so far that has counted for nothing. Despite having a defence treaty with the United States, the Philippines was told that America would not go to war with China over a fishing reef. It does raise the question among many Filipinos of exactly when the USA *would* step in and resist China’s bullying behaviour.

But, the way things unfolded for Jurrick may show the style in which China plans to unseat America as the prevailing power in the Asia Pacific region.

First, in October, knowing his country was outgunned, the new, bullish President Rodrigo Duterte flew to Beijing to cut a deal: Chinese investment in exchange for his keeping quiet about Scarborough Shoal. Next, a Chinese official suddenly appeared in Masinloc itself, all smiles and handshakes, and invited members of the local fishing association to visit China — all expenses paid.

The chairman, Leonardo Cuaresma, a slight, bespectacled man, tells how they were shown around a marine research ship and a hi-tech fisheries center and sent on the bullet train from southern China to more meetings in Beijing. At the end of the tour, China put in an offer to buy all of Masinloc’s fish.

“I don’t know if we can trust them,” said Leonardo thoughtfully. “But we might have to.” 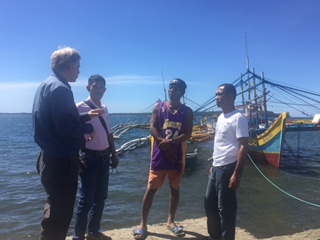 Then, Jurrick got word that it was safe to work again around Scarborough Shoal. In fact, President Duterte wanted the fishermen out there. Jurrick was unsure at first, unable to shake off his nightmares. But the day I saw him he had just come back from a week’s fishing there. He glanced affectionately across to his boat, moored at the water’s edge. Wide bamboo stabilisers stretched from a long canoe-like hull, painted in yellows, greens and blues, all lashed together with ropes and wires. From a bygone age, you could see it was no match for Chinese fishing technology or for that matter its water cannon.

That week’s work earned Jurrick ten times more than ferrying passengers on his motorcycle. In recent years, he had been unable to provide for his wife, Melinda, and their four children. It got so bad that Melinda had to get work as a domestic helper in Saudi Arabia where she is now.

“I had lost all my confidence,” he said, his lip quivering as he ended his story. “I am a fisherman. It is who I am. Now that I can do that again, Melinda can come back and we can live as a family.”

For a few months last year, the prize for the busiest airport in the world slipped away from those … END_OF_DOCUMENT_TOKEN_TO_BE_REPLACED

I first met Hsiao Bi-Khim on a sidewalk during Taiwan’s 2008 election campaign. Sitting on a low … END_OF_DOCUMENT_TOKEN_TO_BE_REPLACED