In Paraguay, the small ethnic Indian community has vowed to make a stand against the government – which has been recently accused by the US of violating their basic human rights, of shelter, medicine and schooling. Traditionally, the Paraguayan Indians were among the most accommodating in Latin America to Spanish colonizers, but recently they’re have been an increasing number of incidents involving land rights and other disputes. The Indians make up less than a 100,000 of the 5 million population.

After a trek of three hundred miles, it was a humiliating place to end up, on a broken plastic chair, in the ground floor entrance and garage of a run-down government building known, locally as the INDY – the Paraguayan department which handles the affairs of indigenous Indians.

But that’s where we found Nestor Flores, a chubby Buddha-like man, in his late forties who had come down from the inhospitable hunting land in the north to see what was happening about the government’s promise to build a school for his village.

Nestor was a tribal leader, and with him were a dozen other leaders from all over Paraguay, wasting away their day waiting for a meeting with Mrs. Olga Rojas de Baez, a ferocious blonde Paraguayan in charge of the INDY.

Nestor had been there for ten days. The others for as long as three months, and when Olga walked through to go to her office, their eyes didn’t meet.

There were no greetings no ‘I’ll see you in a minute,’ from her. No shouting of abuse from them, or even pleading for an appointment.

Just a complete silence, as if it was the natural way for the Indians to wait, for the Paraguayans to ignore and for nothing to happen.

Upstairs, Olga’s air conditioned office was decorated with sketches of Indians, the women bare-breasted and the men in head-dresses with spears. She gave us a colorful woven bag and insisted we visit an Indian handcraft centre.

‘Sure,’ I say, ‘But first tell me why the Indian community isn’t integrated properly into society.’

Without drawing breath, Olga says: ‘It’s up to them to take the first step, and they won’t do that because they don’t like to get close to Paraguayan culture.’

‘But what I don’t understand,’ I went on, ‘Is why you head this department and not an indigenous Indian.’

‘Oh an Indian couldn’t do that. The Indians don’t have the university education. I don’t know any accountants or economists among them.’ Then even Olga thought she might have over-stepped the line and added ‘It’s not that Indians don’t have access to education it’s that they don’t use.’

When the Spanish Conquistadors began conquering Latin America four hundred years ago, the Paraguayan Indians were among the most welcoming and Paraguay one of the first places to be colonized. It also took a lead by writing land and other Indian rights into its new constitution in the early nineties.

Which begs the question, though, why, shortly after our interview, Olga was sent up to Washington to defend herself over allegation of human rights abuses against the Indian community.

The answer probably lies in a hospital, opened three years ago, on the outskirts of Asuncion. ‘Go there,’ Olga had insisted effusively. ‘We built it completely for the Indians. It’s always full. A fantastic success.’

When arrived, we found Olga herself had never even visited.

Beds were empty and rusting mattresses rolled up and damp from the rain and humidity. No doctor was there. Just one Paraguayan nurse, disgusted with her own government for failing to supply medicine – even bed sheets.

Upstairs, we found Carmen Martinez who was back with her two-year-old daughter, Maria, for the second time. Maria had hydrocephalus where her skull had expanded because the cranial fluid hadn’t properly drained.

‘I’ve been asking for help ever since she was born,’ says Carmen. ‘All I know is that Maria needs an operation and then she’ll be better.’

Yes, Maria does need a simple, routine operation, but, now, she might not get better. While in Paraguay we did try to find a doctor to come out and give us an assessment. But couldn’t get one to come to the hospital. Back in London, we asked an expert to look at our pictures.

Eighteen months ago Maria could have been saved, now she’s definitely brain damaged and living in terrible pain – you can tell by the way her eyes move. And in another six months, without help, she could be dead.

Maria wasn’t a third world child caught up in war or famine. She was victim of something more complex – political neglect.

Near-by the hospital is the camp for the Maka tribe. There was a birthday party going, with dances, head dresses, totem poles and spears – a complete depiction of Olga’s view of the Paraguayan Indian.

Except there was something else to – a man called Temi Lotzin, a guest from an Indian tribe in Mexico, who spoke English, German, Spanish, had a Hotmail address and had been invited to advise the Maka how to handle their problems with the government.

‘The indigenous people need to do something,’ he said. He talked about the armed uprising in Mexico and I asked him if it would spread. ‘If that means we need to die to defend our rights we will do that but we don’t want to use the weapons because the weapon is only death.’

This is the latest revolutionary talk of Latin American – reaching even remote Paraguay, because the yawning silence between the blonde, gushing Olga and the quiet little Maria, whose pain and dying seems to be too much of a challenge for anyone to meet. 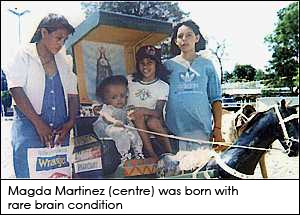 A Paraguayan infant has been given life-saving surgery after a British family heard of her plight through the BBC.

Correspondent Humphrey Hawksley reported on the impoverished conditions of the indigenous population in March this year, highlighting the case of three-year-old Magda Martinez who was born with the brain condition hydrocephalus.

María Magdalena Mora Martinez – known as Magda – has a lovely and friendly smile, chats animatedly, laughing and greeting everybody by name.

She was born on 4 May 1998 in a hut in the remote indigenous village of La Esperanza in the arid Chaco region of Paraguay, 192km from the capital Asuncion. 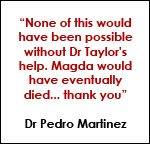 Her mother Carmen Martinez, who comes from the Lengua indigenous community, was in labour for 12 hours. The reason for the protracted birth was apparent as soon as Magda was born.

Her head was unusually big as a result of hydrocephalus, a condition where the skull expands because cranial fluid has failed to be drained.

The problem may have been caused by her mother’s poor nutrition during pregnancy. Magda has never been able to sit, crawl or walk due to her condition.

A British specialist warned that without help, Magda could be dead within six months due to the build-up of pressure on her brain.

Indigenous communities in the Chaco are very poor and they have very little access to medical aid.

But then a director of the local Indian Hospital, Dr Pedro Martinez, a neurologist, started to raise money for an operation to relieve her cranial pressure.

The appeal was a long way from its target until Dr Stephanie Taylor, a senior clinical lecturer at Barts hospital in the UK, picked up on the case after seeing Humphrey’s report on BBC News Online.

Dr Taylor and her family offered to pay for Magda’s surgery and the course of treatment needed for her recovery. British Embassy local employees also made a contribution.

Before she could have the delicate operation, she had to recover from an ear infection and slight anaemia caused by malnutrition.

The surgeons operated on 24 July at a private teaching hospital in Asuncion. None of the doctors charged for their services and the hospital’s administration set specially low rates. 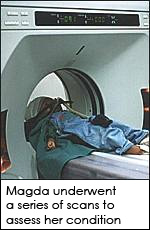 The operation has succeeded in reducing the diameter of her head by at least three centimetres. Magda’s hair is already growing back and her eyes move more freely.

Dr Martinez is quite optimistic. He says that although there will be some kind of neurological damage, Magda will be able to make a fast recovery.

‘None of this would have been possible without Dr Taylor’s help. Magda would have eventually died… thank you’, he said.

Magda is now with her mother at her grandmother’s house in Remansito, 10km from the local hospital where she must attend a series of post-operation check-ups.

Her mother hopes that she will be able to run with the other children one day.

Riding in a high-speed catamaran along an Alaskan fjord, the captain asked: ‘See that glacier ahead? … END_OF_DOCUMENT_TOKEN_TO_BE_REPLACED

For a few months last year, the prize for the busiest airport in the world slipped away from those … END_OF_DOCUMENT_TOKEN_TO_BE_REPLACED

I first met Hsiao Bi-Khim on a sidewalk during Taiwan’s 2008 election campaign. Sitting on a low … END_OF_DOCUMENT_TOKEN_TO_BE_REPLACED