Throughout the year, the United States has hailed a series of elections in the Arab world – the latest in Iraq – as evidence that its foreign policy is getting results. But what can democracy really offer ordinary people?

His name is Souffian Baghari. He is 11.

We drove up and turned the final corner of the road to his home: a rubbish tip. Seagulls and crows swooped down. The birds landed on the backs of goats and sheep and pecked at their wool soiled and dangling with rubbish. Birds and animals alike foraged for food.

People too; many children, rags hanging, heads down, hacking with pitchforks or their bare hands.

I had come to Morocco, not just to look again at more developing world poverty, but to test America’s policy of pushing for democracy in societies which for years have been ruled through dictatorship.

Can it really be done without first building mature political parties, an uncorrupted civil service, a fair court system, institutions which take not months, but generations to create?

But where do you actually sleep, I asked Souffian. He walked over to a huge old tractor tire, lying among weeds.

He climbed in it, curling round inside where the inner tube would have been, put his head on two clasped hands, closed his eyes and pretended to sleep.

‘I do whatever I can to eat. I work on the dump all day and at night I come here to rest,’ he said.

‘What I really want is for someone to adopt me so I can have a normal life.’ 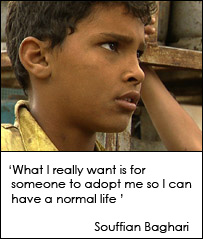 Back down the hill, Souffian and I visited the local school. Walking into the playground, his head turned left and right, his expression relaxed as if he thought he could now suddenly become a child again.

‘Can he enrol in the school?’ I asked a teacher.

But he could not right then because the headmaster was not there.

Nor were Souffian’s parents. So we went to ask the two interior ministry officials we had seen earlier.

‘Let me tell you something,’ said one of them, peering at us through dark glasses.

‘A delinquent child like this represents a big danger to society. We have a list of people like him which we forward to our head office. His parents aren’t here, so what can we do?’

‘Hold on,’ I said. ‘You’re saying that because he has no parents, you can’t help him?’

‘The problem is with the child,’ said the other, pushing a dirty white baseball cap back on his head. ‘It’s pointless to talk about it.’

That evening, I tracked down the Education Minister, Habib El Malki, a suave French-speaking politician with perfect manners dressed in an immaculate cream suit. I asked him why an 11-year-old boy was not at school.

‘Yes,’ he said. ‘There is social marginalization, it’s true, but the policy we’ve put in place is to set up strongly representative local committees which we help to find solutions to put back all the children who’ve fallen through the education net.’

We talked for some time, but never once did he ask where he – or his staff for that matter – could actually find Souffian, until we told him. 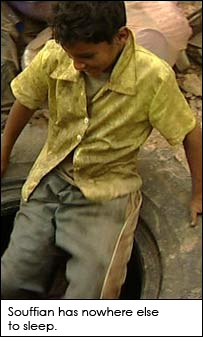 For the next few days I talked to dozens of people in Morocco about democracy. It had little or no resonance.

‘Elections’, scoffed one young mother. ‘During the voting the politicians come, the street light works and water flows from the taps. As soon as voting stops, nothing works again.’

‘You don’t need elections to have a responsive government,’ said a farmer. ‘They’re just an excuse.’

Back in London, I re-read the UN convention on the rights of the child to which Morocco is a signatory.

Article 20 states that a child deprived of family environment shall be entitled to special protection and assistance provided by the state. Article 28 recognizes the right of the child to education. At a primary level it should be compulsory and free.

A couple of weeks later, I asked a colleague to check on Souffian. He was still sleeping in his tire. Still no one had come to help him.

Riding in a high-speed catamaran along an Alaskan fjord, the captain asked: ‘See that glacier ahead? … END_OF_DOCUMENT_TOKEN_TO_BE_REPLACED

For a few months last year, the prize for the busiest airport in the world slipped away from those … END_OF_DOCUMENT_TOKEN_TO_BE_REPLACED

I first met Hsiao Bi-Khim on a sidewalk during Taiwan’s 2008 election campaign. Sitting on a low … END_OF_DOCUMENT_TOKEN_TO_BE_REPLACED