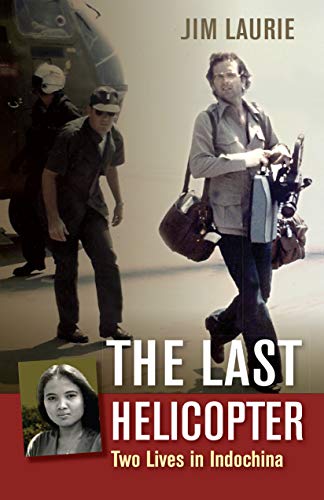 Author of The Last Helicopter: Two Lives in Indochina

Legendary television news correspondent, Jim Laurie, was a 22-year-old adventurer when he arrived in Cambodia in 1970.  Five years later in April 1975 he reported on the catastrophic collapse of first Cambodia and then Vietnam.

And he was in love.

His stunning and highly-acclaimed memoir, The Last Helicopter: Two Lives in Indochina, is a story of a young woman left behind and a reporter coming of age in a world of war; a gripping memoir of Indo China in the 1970s.

Jim was helicoptered out of the Cambodian capital, Phnom Penh, by the U.S. Military. In the chaos and fog of war,  his love, Soc Sinan, was left behind.  As the genocidal Khmer Rouge swept through the country, Sinan ended up in one of their brutal concentration camps.

Jim vowed to get her out. Join this very moving Goldster Inside Story to find out what happened.

Drawn from recorded interviews with Sinan and Jim’s own experiences, The Last Helicopter captures the tensions, fears, and extremes of the early 1970s. It also recalls life in places of grace and exotic beauty that have disappeared forever.

Inside - Jim Laurie
with Jim Laurie Author of The Last Helicopter: Two Lives in Indochina