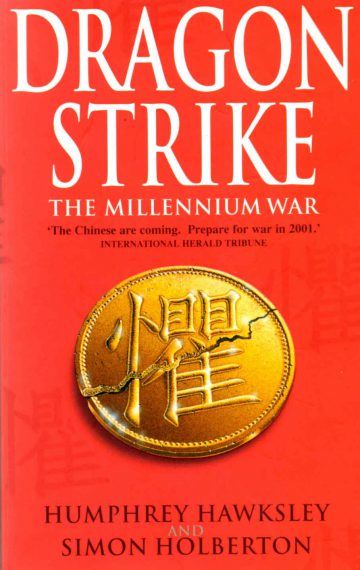 It is essential that we – as an international community – wake up to the challenges presented by China’s manipulation of the long-standing international, rules-based order that has benefited all of us for many decades
Mark Esper, US Secretary of Defense

If they want to fight, we will fight to the end
Wei Fenghe, China Minister of Defense

A cloud of war hangs over the South China Sea. China has been testing the resolve of the region to its limits. The focus is a sprawl of barren islands claimed by Beijing and many other governments. Until now, there have been military and diplomatic stand-offs.

Then, without notice, China launches a surprise attack on its historical enemy, Vietnam and lands troops on the disputed Paracel and Spratly island groups.

Suddenly, East Asia erupts. Western governments react and the world comes to the brink of war.

DRAGON STRIKE, THE MILLENNIUM WAR is a factual thriller examining the global impact of a hostile China. Since publication it has become a substantive point of debate at the highest level of global policy making.

The authors know their stuff, and their timing is impeccable. Humphrey Hawksley of the BBC and Simon Holberton of the Financial Times, both old Asia hands, have constructed an ingenious thriller based on the premise that a resurgent China – soon to become the largest economy on earth – will clash with that other great Pacific Power, America.
Christopher Lockwood, Telegraph

In the end this perceptive book is really about what is now being called the China Problem. Is China on the verge of becoming the ham-fisted bully of Asia? And if so, what should – or can – the rest of the world do about it. The alternatives suggested in Dragon Strike are not appealing.
Barry Hillenbrand, Time

Dragon Strike is a cracking read by two fine journalists who know what they are talking about. Realistic and gripping, it goes to the heart of some of the most worrying issues with which the world will be grappling in the millennium.
Chris Patten, Chancellor, Oxford University, and last governor of Hong Kong

After the absolutism which the Cold War threatened, and the cataclysmic and cathartic wars which have erupted since, this return to the notion of calculation in war is strangely chilling. Dragon Strike‘s international and strategic insight is formidable.
Allan Mallinson, Spectator

The central theme comes through loud and clear: The United States has little idea why it is still in the Western Pacific (other perhaps than Korea). As events every year since 1992 have shown, it has no policy towards China’s seawards expansionism, instead taking naïve comfort in the benefits of “engagement” with a China whose goals have been stated and are unlikely to be changed by smiling faces. Hawksley and Holberton may be too close for comfort.
Philip Bowring, International Herald Tribune

These are two experienced and highly respected journalists, who work for the BBC and Financial Times respectively. Their depiction of China under the post-Deng leadership as a threat to its neighbours and as willing to take risks in challenging western interests is graphic and, in its own terms, realistic. The (Dragon Strike) scenario contains many finely judged and ingenious episodes, not least of which tells how a Chinese military man manipulates the international financial markets to raise sufficient funds to underwrite the costs of the war.
Michael Yahuda, Financial Times