Condemnation of Chinese prison camps in Xinjiang is now drawing in the issue of forced labour, supply chains and whether we should buy Chinese products.  Below is a letter I wrote to The Times and privileged to share the slot with George Magnus, an expert on the issue. 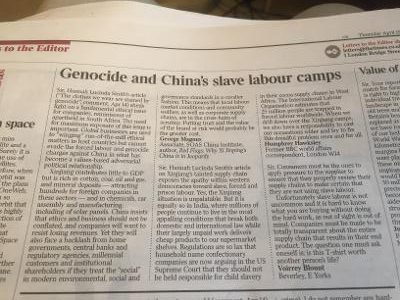 Sir, Hannah Lucinda Smith’s article on Xinjiang’s tainted supply chain exposes the apathy within western democracies toward slave, forced and prison labour. Yes, the Xinjiang situation is unpalatable. But it is equally so in India, where millions of people continue to live in the most appalling conditions that break both domestic and international law while their largely unpaid work delivers cheap products to our supermarket shelves. Regulations are so lax that household name confectionary companies are now arguing in the US Supreme Court that they should not be held responsible for child slavery in their cocoa supply chains in West Africa. The International Labour Organisation estimates that 25 million people are trapped in forced labour worldwide. When we drill down over the Xinjiang camps, we also have a responsibility to cast our accusations wider and try to fix this dreadful problem once and for all.

Winter ice is finally melting on the U.S.-Russian border. This photo by JoAnn Kaningok today from #Alaska's Little Diomede across to #Russia's Big Diomede. The narrow stretch of water is known as the Ice Curtain.