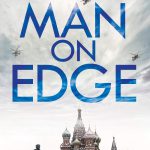 When foreign correspondents come off the road, or slow down, they have a lot of stories to tell. Not so many make the transition as successfully as our next guest, following in a distinguished line of BBC people who turned to fiction, most notably Eric Blair, who wrote as George Orwell, and Frederick Forsyth who […]

END_OF_DOCUMENT_TOKEN_TO_BE_REPLACED 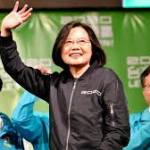 Taiwan has spoken.  President Tsai Ing-wen’s resounding victory on a manifesto to retain distance from Beijing raises an unthinkable prospect for Beijing. Will we now see governments switching their diplomatic recognition from China to Taiwan?  If so, which will start the ball rolling?  In a sweepstake at an election gathering seven names came up – […]

END_OF_DOCUMENT_TOKEN_TO_BE_REPLACED 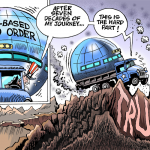 With America’s threat to bomb Iran’s cultural sites, the UN Security Council in paralysis, China and Britain ignoring international court rulings on maritime sovereignty, and Iran sponsoring a swath of terror groups, it’s time to call an end to the so-called international rules-based order. Those, like Iran, who overthrow corrupt, weak American-backed regimes pay a […]

END_OF_DOCUMENT_TOKEN_TO_BE_REPLACED

Hong Kong protestors calling for international support should take note of how Britain and the US deal with unrest and police shootings. In Britain, 945 people were jailed for an average sentence of 14.2 months each after the 2011 unrest, and for far less offences than petrol bombing and attacking police with lethal weapons. Last […]

END_OF_DOCUMENT_TOKEN_TO_BE_REPLACED 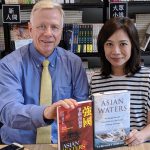 My book Asian Waters is out in Chinese this week translated by the exceptionally talented Rolinda Hsiao. It examines how Asian countries stand in the cross-hairs of China’s strategy of expansion with Taiwan (and now Hong Kong) standing on the front line. https://lnkd.in/g9nvQk2

END_OF_DOCUMENT_TOKEN_TO_BE_REPLACED 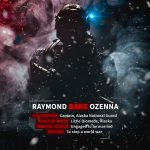 The paperback of www.manonice.co.uk. is out October 3rd and we are testing the building of character and brand  This is for the protagonist Rake Ozenna who s on the remote  island on the US-Russian border when the crisis breaks out. Others will follow. All feedback and suggestions welcome.

END_OF_DOCUMENT_TOKEN_TO_BE_REPLACED 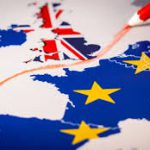 The European Union needs to start getting clever and think out of the box. With Britain’s exit, it has to focus laser like on Europe’s long term political security and the knock on impact of Brexit among other restless members.  Its argument that it will not renegotiated the Withdrawal Agreement that was drawn up in […]

END_OF_DOCUMENT_TOKEN_TO_BE_REPLACED 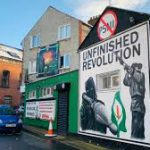 Tory voters backing a ‘do or die’ Brexit are likely unaware of how the dots of global populism connect. Right now, in order to bolster electoral support, nationalist governments in Britain and India are ramping up hostility with neighbors and reviving bad history and specters of bloodshed by targeting ethnic and religious fault lines. In […]

END_OF_DOCUMENT_TOKEN_TO_BE_REPLACED

Foreign correspondent, author of Rake Ozenna Arctic espionage series and Asian Waters; The Struggle Over the Indo-Pacific and Challenge to American Power.

We want to hear from you, your questions and points to consider on the current Covid 19 pandemic, China's accountability and the impact on the country's foreign policy & internal stability. Join me tomorrow for a… https://www.instagram.com/p/CAd6RsjHLZD/?igshid=134ytr024qv23

Amid the challenges of the COVID-19 pandemic, China’s United Front Work Department is putting the Chinese diaspora in danger