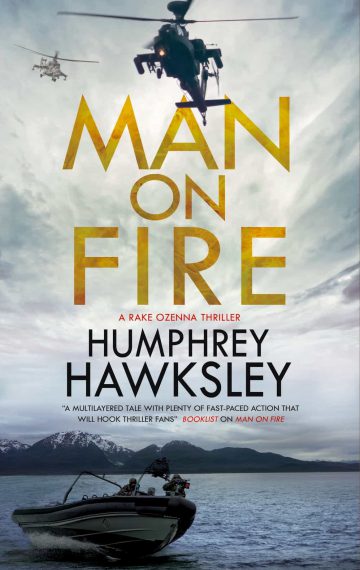 Buy from Amazon.co.ukBuy from Amazon.com
A tense firefight on the Russian-American border heralds the start of a terrifying high-stakes assignment for special forces Major Rake Ozenna in this gripping espionage thriller.

Rake’s mission takes him to a settlement on the Russian coast where he uncovers evidence of a weapon that would cripple civilization as we know it.

But where is the weapon now? Who possesses it, and what is their ultimate goal?

As world leaders gather for the signing of a new European security treaty, Rake enters a desperate race against time to prevent a catastrophe beyond imagining.

Praise for MAN ON FIRE

If you’ve been looking for a gripping espionage thriller with Cold War flavor plus 21st century global awareness, grab a copy of MAN ON FIRE
Austin S Camacho, The Big Thrill

This is not just a page-turner; it is also a wake-up call
Sir Oliver Letwin, former British Cabinet Minister, author Apocalypse How

Told with flair and attention to detail, this is every strategic planner’s worst nightmare
Dr. Peter Vincent Pry, Director, Task Force on National and Homeland Security, author The Power and the Light

Humphrey Hawksley is a pro…. And there’s the Villain, Yumatov, a hard-ass, cold-stoned, iron-like man with unparalleled determination! You gotta love Yumatov, he is FIERCE!
Scribble’s Worth Reviews

A finely written tale of international intrigue and suspense. The conclusion was frightening and enlightening.
Rosepoint Publishing

A taut international spy thriller will keep readers gripped to the end. Impeccably researched and highly topical, it is perfect for readers of VINCE FLYNN, BRAD THOR and LEE CHILD.