There are some names which are immediately recognisable. When I hear certain names announced on the radio or on my computer, they instantly bring to mind something that makes me stop for a moment. Humphrey Hawksley is one such name.

I seem to have known Hawksley for decades. As a BBC reporter, he has been all over the world bringing stories alive to his audience, often in trouble spots, often in danger, often with members of the military and politicians. It is a world he knows very well indeed.

Some years ago, apparently, he started writing novels as well. This is his latest, and he brings all his experience to bear.

MAN ON FIRE brings back his hero Major Rake Ozenna, a native of Alaska who has joined the US Army and become a special forces operative. This book starts with Rake and his friend from childhood, Mikki Wekstatt, are out beyond Little Diomede, a small island in the Bering Strait that separates the USA from Russia. They are in a fishing dinghy, waiting for a contact to make their way to them from Big Diomede – a larger island over the border in Russian waters.

It’s fair to say that the book starts with a bang. The contact is making her way to them, when she is caught in a Russian spotlight and shot at. After an intense fight, Rake and Mikki manage to bring her to their vessel and hurry back to the shore, but she has been too badly injured in the firefight at sea, and cannot give them the information she as bringing.

However, Rake’s boss, Lucas, knew that she had been bringing over a USB drive with details of a new weapon which the Russians were threatening to use. But without the drive, Lucas and the intelligence community were blind. They didn’t know what the weapon was, nor how to prevent its use.

They must learn more. To do that, Rake must embark on his most dangerous adventure yet.

This is a book written by a brilliant thriller author. The great thing about a book by Humphrey Hawksley is, you know he has the in-depth knowledge. He knows the countries he describes, he understands the politics, he has travelled the same roads. It all adds up to a compelling, believable plot that is utterly convincing.

And so, of course, it is highly recommended! 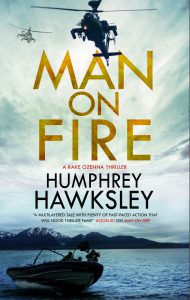 Retweet on TwitterHumphrey Hawksley Retweeted
21 May

Winter ice is finally melting on the U.S.-Russian border. This photo by JoAnn Kaningok today from #Alaska's Little Diomede across to #Russia's Big Diomede. The narrow stretch of water is known as the Ice Curtain.