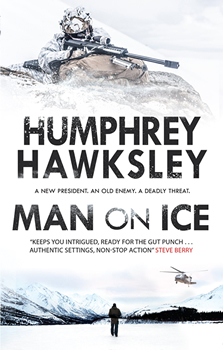 When Rake Ozenna of the elite Eskimo Scouts brings his fiancée, trauma surgeon Carrie Walker, to his remote home island in the Bering Strait they are faced immediately with a medical crisis. Then, Russian helicopters swarm in.

America is on the eve of an acrimonious presidential transition. As news breaks of a possible Russian invasion, Stephanie Lucas, British ambassador to Washington D.C., is hosting a dinner for the president-elect.

Ozenna’s small Alaskan island community is suddenly caught in the crosshairs of sabre-rattling big powers. The only way to save his people is to undertake a perilous mission across the ice. Can he survive long enough to prevent a world war breaking out?

The Big Thrill caught up with author, journalist and commentator Humphrey Hawksley, to discuss his latest thriller, MAN ON ICE:

What do you hope readers will take away from this book?

Sarah Palin was widely mocked for saying Alaskans could see Russia from their back yard. MAN ON ICE takes you to the remote island at the heart of this back yard where an isolated community of American citizens live under the suspicious gaze of a hostile power. I hope that whenever stories about Russia and the Arctic hit the headlines, readers of MAN ON ICE will have an understanding of the vulnerability of this outer edge of American territory and the bravery of the people who live there.

How does this book make a contribution to the genre?

US-Russian hostility is daily headline news, yet very few thrillers have been set on the remote and inaccessible US-Russian border. MAN ON ICE is one of the first to explore the geography and people of the Bering Strait with strong characters that run direct from the island of Liitle Diomede to the White House.

Was there anything new you discovered, or that surprised you, as you wrote this book?

A mountain of discoveries. Probably the biggest was that the US-Russian border is unmarked and unpatrolled, except by faraway surveillance. Yet, any American that strays across will land up in a Russian prison. The US Little Diomede island that is right on the border has no US military or police presence. Russia is barely two miles across a narrow stretch of water.

No spoilers, but what can you tell us about your book that we won’t find in the jacket copy or the PR material?

There is no original document of the 1867 Alaska Purchase. The US-Russian maritime border is disputed. The US has no permanent naval presence or base there. Russia has a highly confidential and involved relationship with North Korea.

What authors or books have influenced your career as a writer, and why?

Graham Greene creates atmosphere, tension and character with very few words. He is unprecedented in dealing with guilt.

Lee Child has no match in the Jack Reacher character and the tension he builds for a Reacher fight scene.

Steve Berry is the master of anchoring present day thriller in historical fact. A real skill.

Frederick Forsyth has a talent to build tension while showing the reader something totally new and often technical.

Alan Furst’s characters caught up in Europe’s savagery of the 1930s and 40s gives us a brilliant perspective on the moral choices of the time.

Watch this space until November and how #Britian * #Europe reacts.