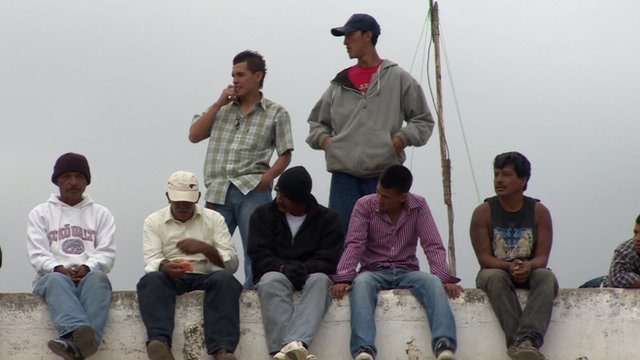 Guatemala is one of the most violent countries in Latin America, with thousands of drug-related killings each year. The BBC’s Humphrey Hawksley reports on the authorities’ new approach to fighting the drugs trade, which may include legalising the growing and transport of hard drugs.

The prison’s maximum security wings house leaders of gangs funded by international drug money. It has a bloody record of violence.

In 2008, a fight between rival gangs left seven prisoners dead, five of them beheaded. Pavoncito became a battlefield between inmates who supported the prison authorities and the gangs who had taken control of large parts of it. The gangs resorted to cannibalism after food supplies ran out, according to inmates.

“For four months, the authorities could not come past this line,” explains one inmate, pointing to prison cells and an area of open land, where prisoners are now playing football.

The gangs’ hold was finally broken in a pitched gun battle with prison guards and police, with small firearms and grenades. 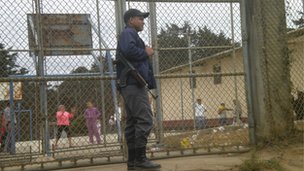 An armed guard on patrol at Pavoncito prison

The wing has now been transformed beyond recognition.

We have been given exclusive access. Our interpreter is Andres, who says he is in Pavoncito for smuggling contraband.

Inmates are playing volleyball in a dirt yard behind us. In front, they weave hammocks and carve handicrafts. Many are there because of drug offences and links to cartels.

Andres points and says: “He’s in for robbery. This one is in for kidnapping and this is Captain Byron Oliva. He’s in for extra-judicial killing.”

Oliva is 43 years old, convicted for involvement in the 1998 murder of activist Bishop Juan Jose Gerardi. He also used to fight with a special forces unit, the Kabiles, that takes on the cartels.

Oliva was a key figure in the prison’s change from violence to relative peace.

“The [drugs] problem is getting worse because of the route from South America up to Mexico – it means the narcotics pass through Guatemala and this creates violence, crime and murder,” he says.

Gang violence here underlined for the government the high stakes and money wrapped up in the international narcotics trade.

Guatemala believes lessons from what unfolded here could be applied to the drugs war that is tearing the country apart.

Neighbouring Mexico began a crackdown on the cartels in late 2006. It is estimated that more than 60,000 people have been killed in drug-related violence in that time.

The cartels have brought much of their money and guns across the border to Guatemala.

Guatemalan officials say the country’s fragile democracy has been undermined as these cartels have taken control of swathes of the country and recruited disaffected youths to their ranks.

“This military campaign against drugs has failed. The real problem is the usage and consumption which is not done here. We’re now thinking of new ways – one is decriminalising the trafficking which will help stop the violence.”

This idea, being put forward by Guatemala to decriminalise and regulate the international trade in drugs such as heroin and cocaine, is unequivocally condemned by Britain and other Western governments.

“Drugs destroy lives and cause untold misery to families and communities – and this is why we believe they must remain illegal,” the UK Home Office said in a statement. “Decriminalisation is not the answer.”

International agreements against the trade in narcotics date back to 1912. 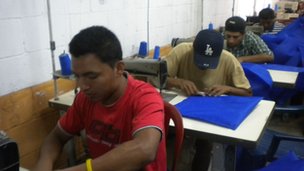 The United Nations estimates that there are 230 million drug users globally, and the annual trade in illegal drugs is worth an estimated $330bn (£215bn). Most of that is in Western countries – not where the drugs are grown and processed.

Guatemala is not yet clear on how decriminalisation would work. The idea of legal containers of cocaine being loaded onto ships in port might be far-fetched, but with the drugs trade undermining fragile states such as Afghanistan and Burma, its initiative for change is gaining support.

Guatemala is now seeking official backing within Latin America. It’s also lobbying European governments such as Portugal and the Czech Republic that have moved towards decriminalisation for drug users.

The method used in Pavoncito prison was to isolate the hard-line gang leaders and move them away. Then traffickers and gang members were given a chance of rehabilitation, which included working for a salary, studying and sports.

“Drug dealers and drug traffickers are not evil people,” says prison director Azalia Lopez. “They are in it for the money and can be reformed.”

Guatemala believes a similar formula as the one used in Pavoncito might help tackle the wider international drugs trade.