Britain’s occupation of a swathe of the Indian Ocean claimed by Mauritius follows almost line for line China’s claim to the South China Sea which is challenged by Southeast Asia countries. The UN General Assembly this week voted a crushing 116 to 6 that Britain should leave and London’s unimaginative and hubristic response underlines exactly why the current world order is breaking down.
In 2016, the Permanent Court of Arbitration in the Hague found that Beijing’s South China Sea claim was illegal. Beijing refused to recognise the ruling and was condemned by Western democracies for violating the ‘rules-based order.’ Yet, a year earlier, exactly the same court had ruled that Britain was acting illegally by exercising territorial control over the Indian Ocean’s Chagos Islands. Britain did nothing. In February this year, the International Court of Justice ruled that Britain should hand back control of the Chagos Islands to Mauritius. Britain did nothing. This week, the UN general assembly, representing the international community, delivered its unequivocal verdict demanding that Britain comply. Britain says it will not: It does not recognise the Mauritian claim. Little wonder that China is in the ascendancy when those who initiated the concept of international law so blatantly ignore its rulings. Good luck to the HMS Queen Elizabeth when she heads off for her Global Britain gun boat diplomacy to challenge Beijing in the South China Sea. 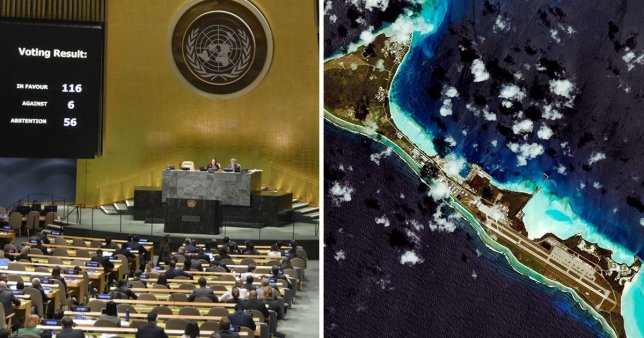 The Covid-19 pandemic should have been a straightforward apolitical challenge - but global and local governments quarrel over masks, social distancing & the magnitude of the crisis
#GlobalGovernance #Covid19 #UNSecurityCouncil #EU @hwhawksley