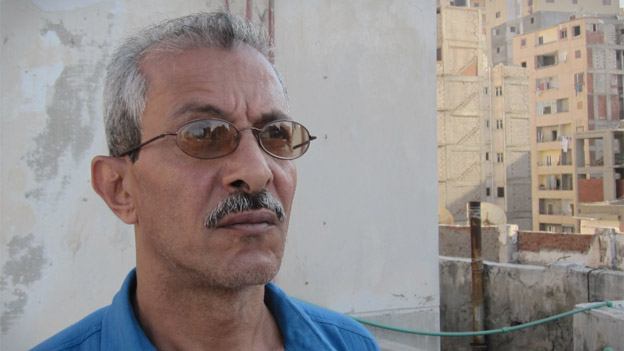 Hamad’s father, Badr Houssana, on the roof where his son was killed.

A young bystander watching a rally by supporters of Egypt’s ousted president in the northern city of Alexandria this month, was killed by being dropped from the top of an apartment block. The BBC’s Humphrey Hawksley talked to his father.

“We’ll talk in here,” he says, pushing open the glass door to a little shop that sells decorative household fittings. Houssana is an interior designer. As the door closes, hushing the traffic noise outside, I show him a sheet of paper with a print-out from a YouTube video.

It’s of a cluster of men on the edge of a roof top. Chillingly, one is falling, and in the frozen, grainy picture he is in mid-air, head down, arms splayed. 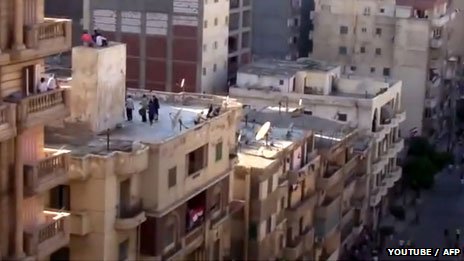 Mr Houssana studies it. His lips tighten. He points across the street. It was over there, he says. On that apartment block. There were three of them. Two were injured and my son, Hamad, they threw him right down to the ground floor.”

He puts my printout on a table and draws a breath. “I was at work and my sister called me, Hamad’s aunt, and she said he’s injured. You need to go to him. The traffic was blocked, but I got a ride on a motorcycle and found him in the hospital.

“The bed wasn’t long enough for him. His head was hanging back and his blood was dripping on to the floor. He was conscious and he said to me: ‘Dad, I’m going to die. Please take me home.’ 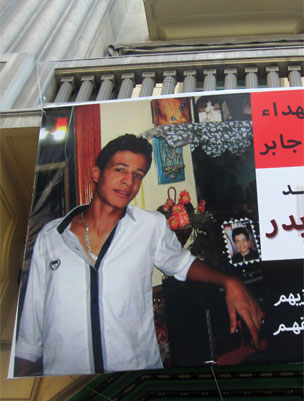 “I told him not to worry. He would be fine. But he was screaming out in pain and I knew it wouldn’t really be like that.”

Three hours later, Hamad, who’d just turned 19 and was training to be an electrician, was dead.

Houssana told me how his son had been watching an Islamist protest supporting the deposed Egyptian President, Mohammed Morsi. Gunfire broke out and he and others ran into the apartment building. They were chased up on to the roof by the protesters. The Muslim Brotherhood denies any involvement.

Houssana shakes his head. “He didn’t know anything about politics. He was an only child, so he gave his love to animals. As a kid, when the rubbish men cleared away the garbage he thought the stray dogs and cats would be hungry so he spent his pocket money on food and left it out for them. He looks after strays. His last words to me were: ‘Dad, please care for my new dog.'”

He makes a phone call, then we leave to go to the apartment block – 30 Elmoshir Street.

It’s a fairly well-to-do building that Houssana thought had been built by the French. 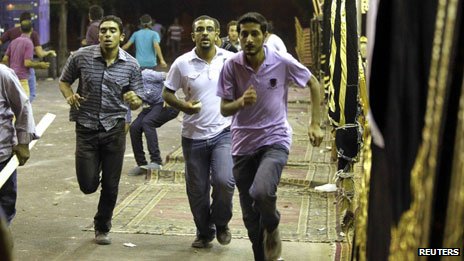 Alexandria has seen clashes between pro- and anti-Morsi protesters

“This city has been ruled by Romans, Greeks, Christians, Muslims and colonialists and we’ve always prospered,” he says, as we walk precariously through the traffic.

In its heyday, Alexandria, with its long, curved Mediterranean coastline, dwarfed both Rome and Athens as the world capital for science and learning. It was here that geographers declared the world was round and not flat, that the concept of the atom was originally discussed, and where Archimedes of “Eureka!” fame designed the first water pump.

“We’ve always had foreign influence,” he continues. “But now – who are these people who use Islam to pull us back into the dark ages?”

We push open the heavy black metal door of the apartment block. Inside it’s dark, but we can make out the stairs from random streaks of light. As we climb, we see dried blood on the floor that becomes more concentrated as we reach the top. I push open a small door and we step out on to the roof.

Houssana hasn’t been here before. He walks around silently. He finds the spot where Hamad was pushed and from where he fell, all the way to the ground. He leans and looks down for a long time.

He has difficulty keeping his composure. 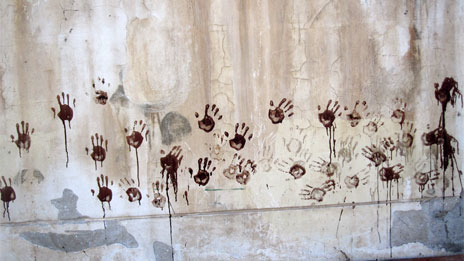 He points to a faded yellow wall. It’s covered in a dozen or more hand prints of blood. He taps his head; “These people are crazy. They’re evil,” he says.

Then his phone rings. He answers it.

“Hamad’s new dog was a German Shepherd,” he says. “She’s black with gold down her collar. He’d called her Julia. He looked after her while she was pregnant and the puppies…”

He breaks into a small, sad smile. “Well, they’ve just been born.”